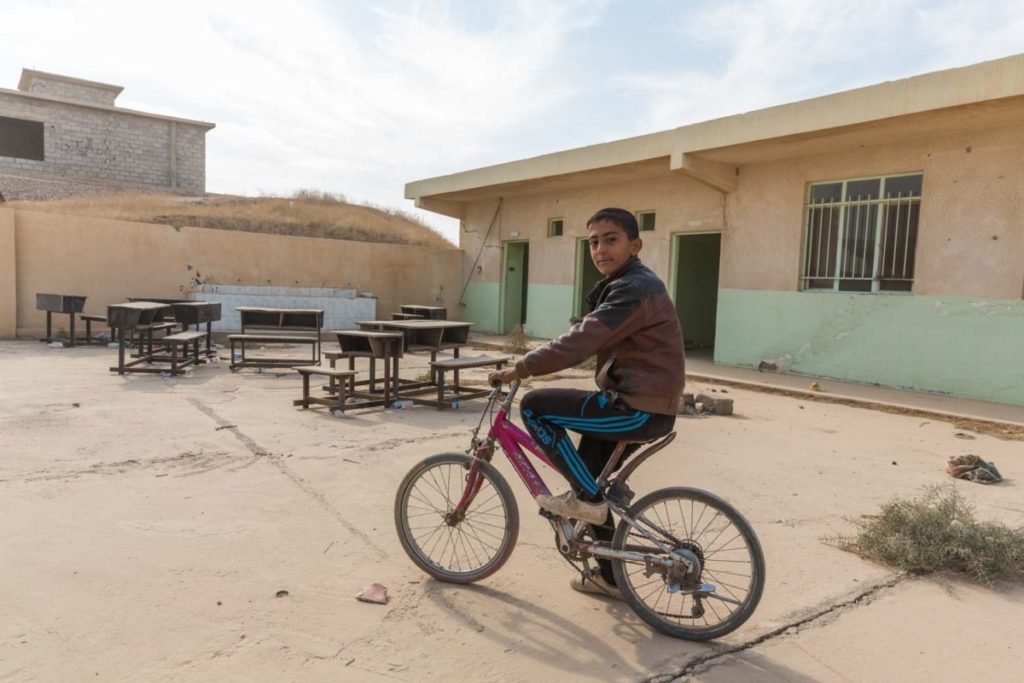 As the battle to retake Mosul continues, urgent action is needed to allow children to resume their educations. Take action by sending an email to Congress now [action expired].

Information about the ongoing military campaign to retake the city of Mosul, Iraq is not leaving news outlets. Regained territory from ISIL is full of villages that are now emptied, destroyed, and abandoned. Cities once teeming with people have been decimated. For several reasons, families have difficulty returning home.

Some homes and buildings have been completely destroyed by the fighting. Many families are concerned about safety. There is a high likelihood that their homes and towns are booby-trapped with hidden grenades and improvised explosive devices (IEDs) — bombs constructed in a unique fashion and well disguised. In 2015, Iraq saw nearly 8 thousand civilians killed and 15 thousand injured by IEDs.

Hassan Sham is a village in Iraq that has been a ghost town for one year, but 15 families have now returned, including the family of 13-year-old Hamaad*. Life is exceptionally challenging for them because there is no electricity, water supply, or functioning schools — services that are the backbone of communities. For many, these problems alone would be reason enough not to come home. Without electricity or a good water supply, routine tasks such as bathing and cooking become problems that must be solved. Other tasks like getting a good education are even more difficult.

Hamaad has been out of school for over two years. He does not have the option to learn in his village because there are no teachers. Schools in Hassan Sham have been bombed and bear the marks of battles.

World Vision is actively working in the Kurdish Region of Iraq to support the many internally displaced persons (IDPs) — families just like Hamaad’s. World Vision, as a partner with the World Food Program, is the largest provider of food aid in the region. Additionally, World Vision has programs for clean water systems, hygiene kits, registering IDPs, and special assistance for children in emergencies. There are currently over 3 million IDPs in Iraq.

World Vision also recommends that the United States Congress prioritize critical humanitarian funding. It is key that the long-term needs of IDPs are addressed in this fragile context. Iraq has been involved in a hard fight, and they need support to help their citizens recover and rebuild their homes. The United States can help the government of Iraq rebuild what has been lost in the fighting so that families can move back home. Iraqi citizens need good governance, education, housing, and infrastructure. These reconstruction programs are important to restore peace and social cohesion.

Hamaad is just one Iraqi citizen, a child who needs an education because he wants a future. He would like to become a doctor. His father believes in him and hopes that there will be a way for Hammad to finish school. Currently, because his school is not functioning, his life is on hold. Advocates like you can speak out and help Hammad realize his dreams. Act now [action expired].

Watch this video to learn more about the current situation in Iraq:

*Names have been changed to protect identities