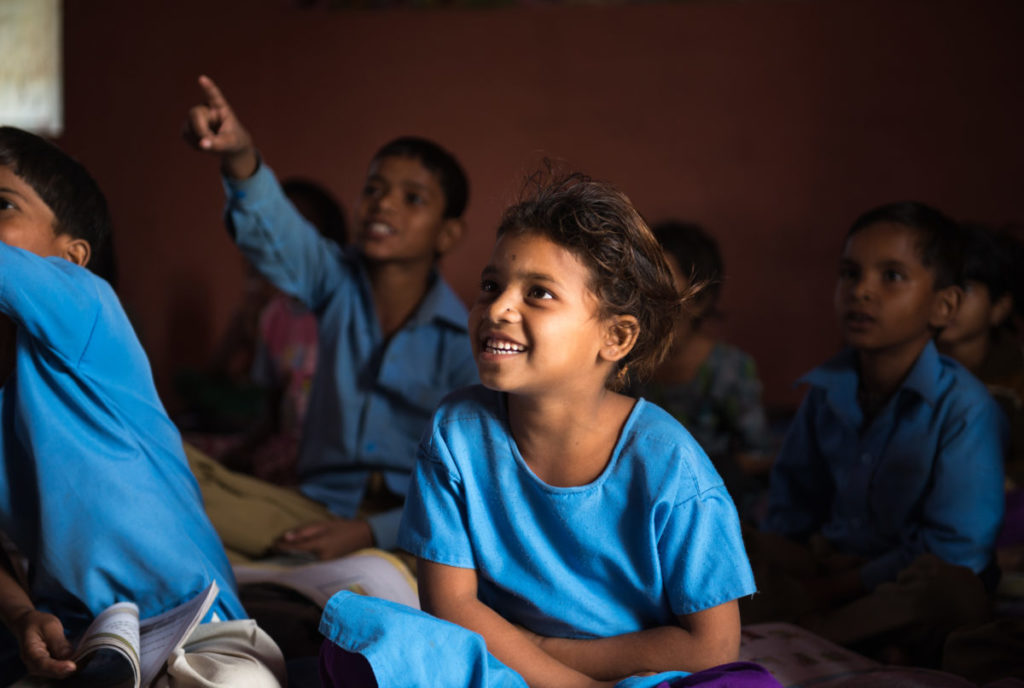 “It took an hour [long] walk to reach school. We had to [wade] through deep sewage during the rains. Stray dogs also followed us,” says 8-year-old Seema, who lives with her grandmother in a village in Tonk, Rajasthan, India.

These were only some of the dangers she and her friends faced on the way to school. Due to a lack of teachers, in 2014 the Rajasthan State Government merged a number of primary and secondary schools.

One such merger happened that August when the Dakhiya School, at Tonk district merged with a larger secondary school that was more than 1.5 kilometers away, impacting Seema (center) and her classmates. This forced a lot of students to drop out due to the distance and the lack of public transport.

“I was extremely sad when I heard they were closing down the primary school,” says 46-year-old Sitaram, the headmaster of Dakhiya School. “Children already faced difficulty attending this close-by school. Going to the further one for classes is impossible.” Students at Dakhiya School mostly belong to marginalized tribes along the lines of the Indian caste system.

A survey done with World Vision showed that out of the 54 students that studied at Dakhiya, only a handful continued going to the merged school. The merger made it difficult for children like the ones pictured above to make it to school to learn, play, and have a safe space to be while their parents were at work.

“When the school was closed down, a lot of parents’ work got hampered because they would have to [take] their children to school, walking about an hour. Most of them were daily wage laborers who had to rush to the cities at dawn,” says 60-year-old Jagdish, a Citizen Voice and Action (CVA) member. In this photo Seema (center) and her classmates sit in front of (L-R) Jagdish, a CVA member; Pokhar Lal, the vice village chief; Veer Singh, the remedial school teacher; and Sitaram, the principal of Dakhiya primary school.

Citizen Voice and Action was implemented by World Vision in India in 2009 by forming a core team from the existing local structures such as the Village Development Council, self-help groups, and other community-based organizations.

The purpose of the CVA team is to equip community members, establish leadership, and coordinate groups that can come together to advocate for their own rights.

The 11-member CVA core team of Dakhiya village formed in 2013. They meet once a month to discuss children’s health and hygiene, education, mid-day meals, and other issues. And they were already well versed with the provisions of the nation’s relatively new Right to Information (RTI) and Right to Compulsory Education (RTE) Acts.

“Since the primary school closed, four to five parents would come every day, asking the CVA team to help reopen the school,” says Jagdish. After detailed discussions with the community, the CVA team met with the principal of the school who supported their position. With the signatures of every community member, a written application regarding the need to reopen the primary school was submitted to the District Collector and the Member of Legislative Assembly (MLA). Soon an investigation was initiated. The surveyors discovered that the distance from the community to the secondary school was beyond one kilometer—the official standard.

“Dakhiya is one of the two schools we reopened due to the difficulty in access and distance,” says Ajit Mehta, MLA of Tonk district.

The primary school at Dakhiya was reopened in November of 2014, which led to the re-enrollment of a large number of children from the community who had dropped out.

Above, Seema and her classmates stand in the reopened school. Currently, there are 42 children from the first through fifth grades enrolled at the primary school. Seema is in fourth grade and lives with her 50-year-old grandmother, Badam.

Seema’s parents are construction laborers, and they live at Jaipur, which is about three hours away by bus. She eagerly waits for her parents to join the school meetings when they are around because she understands how vital education is.

While her parents are away, she and her grandmother spend time talking to them over the phone. “I want to become a teacher and educate my village,” says Seema.

“Seema has been living with me for the past three years now, and she is an obedient child. She loves going to school and studying,” says Badam. “Now, I’m happy to go to my school nearby,” says Seema as she drinks fresh milk before heading to her reopened primary school.