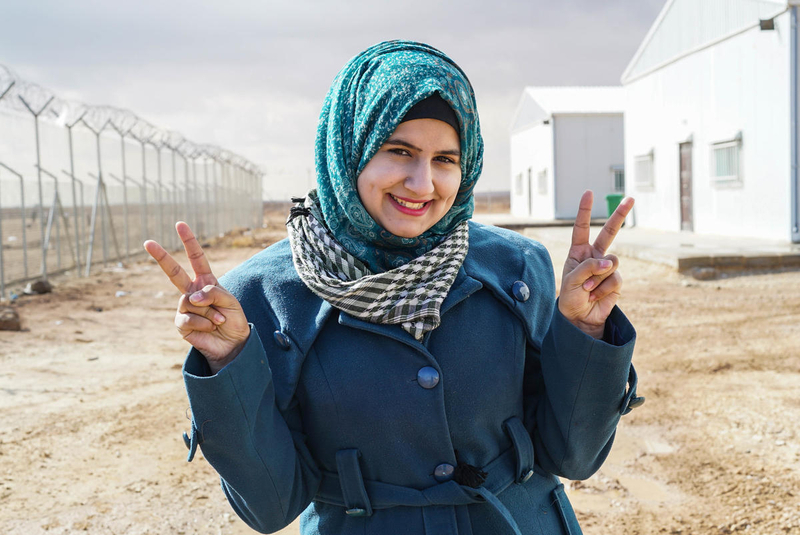 As the world continues to battle the COVID-19 pandemic, many of our nation’s leaders (thanks in part to your advocacy!) are recognizing the importance of the global response to this disease. Perhaps you’ve even emailed or met with congressional offices who are focused not only on helping their constituents stay healthy and economically stable, but also the security of the country as a whole. They might be asking (like many of us): how can we best protect and ensure the well-being of the American people and the world?

At World Vision Advocacy, we work to protect and ensure the well-being of people across the globe. For example, we support the Keeping Women and Girls Safe from the Start Act, which helps protect and empower women and girls in conflicts and emergencies. BUT — did you know that protecting women and girls in these situations, and empowering them to use their voices for change, actually benefits the security of an entire nation and the world?

Here are 5 reasons why empowering women leads to more peace and stability, showing that it’s not only the right thing to do, but the smart thing, too!

Violence against women is actually a predictor of whether a whole society is generally prone to conflict. In 2014, 14 out of the 17 countries that scored at the bottom of the Organisation for Economic Co-operation and Development’s index measuring gender-based discrimination experienced conflict in the last two decades, including Syria, which was ranked the third most discriminatory country against women and girls.

Lack of gender equality not only affects a state domestically, but has even been linked with higher incidence of violence and aggression in international disputes. On the other hand, when a country has norms and laws that protect women and their rights, this is correlated with a reduction in international conflict. Researchers have summarized this important relationship by stating that “the promotion of gender equality goes far beyond the issue of social justice. It is a necessary condition for international peace.”

2. When women and girls participate in peace negotiations, the quality and duration of peace increases.

In the last three decades, across 40 peace and transition processes in 35 countries, a peace agreement was almost always successfully reached when women’s groups or female mediators were able to participate. The agreements were also 35% more likely to last at least fifteen years. And when women are able to sign peace agreements, it increases the chance they’ll be implemented quickly and fully. This is one of the reasons the U.N. Security Council drafted Resolution 1325, which calls all member states to ensure the representation of women at every level of decision-making, and their involvement in preventing, managing, and resolving conflict.

During national negotiation talks after Liberia’s civil war in 2003, women weren’t invited — but they decided to show up anyway. They marched, prayed, and danced, using their voices and presence to successfully demand a say in the process. This eventually allowed them to play a strong role in mobilizing Liberian citizens to vote in the new national elections, when the country elected Africa’s first female head of state.

Women are uniquely able to unite various groups across society, as well as connect leaders with local communities. They help promote trust and dialogue, because they are often viewed by the parties to a conflict as honest and well-intentioned.

Studies have found that women’s equality is strongly linked with a country’s wealth and income. When women experience equal employment opportunities, research reveals an association with reduced poverty and a higher GDP. These economic measures are significant in predicting war, as poor economic conditions may be catalysts for conflict.

Women also take on the important role of influencing the success and productivity of future generations. When they are the head of their household, research suggests that they will invest 90% of their income back into their families. Rural women in particular tend to lead farming cooperatives and microcredit groups in their communities, in order to build economic resilience and make sure there are “safety nets” so no one suffers.

When a country advances gender equality in order to create a more robust economy, it helps protect itself from fragility. Fragility refers to the absence of coping mechanisms for nations, communities, and individuals to respond to shocks to their security, economy, and political institutions. When a nation reduces its fragility or prevents fragility altogether, it can more easily avoid spiraling into violent armed conflict.

4. Women are often the first to notice rising tensions in their communities, and can help moderate them before they escalate.

Because women often bear the brunt of indirect effects from conflict, including the breakdown of the social order, human rights abuses, the spread of disease, and economic setbacks, they are also the ones most attuned to insecurity within their communities. They are typically firsthand witnesses to how a conflict affects the most vulnerable, and as a result, they can support effective social and humanitarian solutions including providing clean water, nutritious food, or protection of children.

Interviews conducted with 286 participants in a study across 30 countries in the Middle East, North Africa, and South Asia revealed widespread agreement that women are the first to take a stand against terrorism and extremism, especially as they are often the first to be targeted physically or have their rights taken away. These participants confirmed that women are able to detect early warning signals of impending violence and radicalization because of their strong presence within their communities.

5. When women are in leadership, there is an even greater chance of peace in a country — and, female leaders advocate for more gender equality!

Research shows that having more female leaders significantly reduces the risk of a civil war in a country. A country with more women leaders is also less likely to carry out human rights abuses against its own people.

In regards to conflict with other nations, when the percentage of women in parliament goes up by a mere 5%, a country is five times less likely to use violence during international crises. The National Democratic Institute has also found that female leadership in particular is linked to positive developments in education, infrastructure, and health at the local level.

Even more importantly, having women in leadership can actually break cycles of conflict! A study looking at 58 states over the course of two decades found that when there were no women in a country’s legislature, the risk of conflict relapse actually increased over time, but when a legislature was at least 35% female, the risk of relapse all but disappeared.

When women enjoy a relatively high social status, the entire local population actually shows an increased desire to participate in peacebuilding and prevent conflict. Finally, women in leadership help ensure that peace agreements and laws include provisions ensuring gender equality, so that a country can continue to benefit from the peace that comes when women are empowered.

Across numerous contexts, women are viewed as symbols of a nation’s cultural and ethnic identity, and also the mothers of future generations. This means that they are trusted and have a unique and important role in society. Unfortunately, conflicts and crisis commonly exacerbate harmful gender norms, exposing women and girls to heightened risks of violence and violations of their human rights.

Ultimately, God has gifted women a special place in our societies, with voices and ideas we should heed in order to create a world where the most vulnerable are safe, heard, and empowered with opportunities to succeed.

Today, you have the opportunity to stand up for women and girls in conflict and crisis by asking your Senator to co-sponsor the Keeping Women and Girls Safe from the Start Act. This important legislation recognizes the value of women and girls in meeting community and cultural needs during crises and empowering them to be leaders in those efforts. This bill will make U.S. contributions towards humanitarian aid stronger and more effective by both protecting and empowering the women and girls affected by conflict and disaster.

Top photo: Eighteen-year-old wife and mother Marah, is a Syrian refugee. “My message to every young woman in the world is, do not stop dreaming for any reason,” she says. (© 2018 World Vision/photo by Amanda Cupido, Mark Karam)