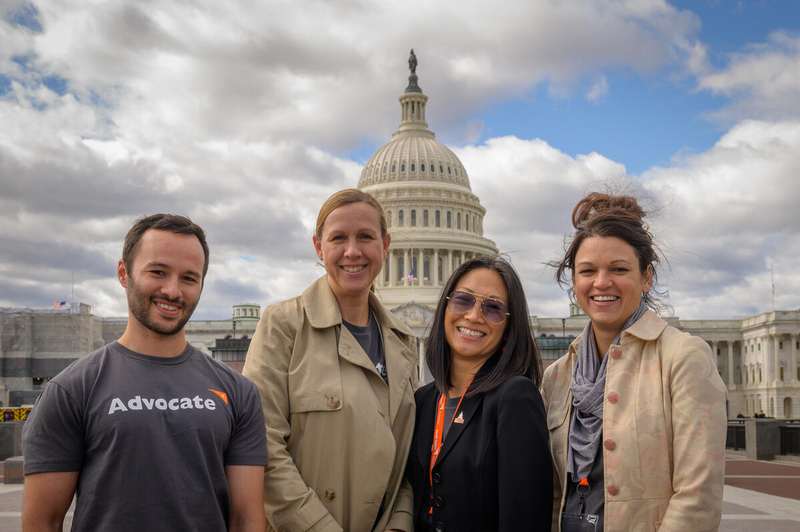 Above, World Vision Director of Government Relations, Lisa Bos (second from left) stands with World Vision Advocates outside the U.S. Capitol building in October 2019. Note: Images taken prior to CDC’s guideline to wear masks in public.

In the most recent polling from Gallup, 71% of Americans disapprove of the job Congress is doing. This is actually a pretty good number given that in past years, that number has at times been well over 80%.

But looking historically (Gallup goes back to the 1970s), Congressional disapproval was in the range of 30–40%. What is it about today’s political climate or about how we view “politicians” and public servants that has increased our negative view of Congress? As Christians, how do we look for the godliness and goodness in public service?

When I first came to Capitol Hill as an intern during college in 1996, I was so excited to put my political science knowledge into practice and to meet members of Congress that I viewed as my political heroes. I was able to go into then Speaker of the House Newt Gingrich’s office and meet him. When I became a full-fledged staffer in 1997, I had even more opportunities see and meet people, like Ted Kennedy, Presidents Bill Clinton and George W. Bush, John Boehner, and even work with then-staffer and future Speaker of the House Paul Ryan. I went to White House picnics, inauguration events, and cocktail receptions.

But despite the amazing experiences I had, I was there for the work. I loved feeling like I was helping people and making a difference. Even when there were divisive moments, like during President Clinton’s impeachment and people were yelling at me on the phone, I felt like my work mattered. In more unifying moments, like 9/11, I was proud that the bipartisanship that existed behind closed doors was visible. I was a little afraid to go back to my Congressional office on September 12, 2001, but we did it because our constituents who paid our salaries expected us to be back working for them and for our country.

There were certainly times when I could very clearly see how God was working in the hearts of decision-makers and in my own work during my time on Capitol Hill, but honestly, most of the time it was harder than I thought it would be. It was easy to get discouraged — the bill I was working on was not getting any traction, a meeting didn’t go well with a constituent, or my vote recommendation wasn’t followed by my boss. Looking back, I know that God was teaching me perseverance and patience (not always my strong suits). He also had me working for a Congressman who was a believer, which gave me a supportive environment as I grew in my faith after moving away from the comforts of home.

Not everyone gets the experience of public service. It’s not an easy place to be, especially now when social media enables and promotes criticism over positive stories about those who serve in a political position or as career public servants. We hear about the mistakes and missteps, not about how they helped someone get their full Social Security benefits or worked through a tricky immigration issue. We hear that they voted no or held up a bill they disagreed with, not about the dozens of other vital bills they are supporting and that are passing through Congress every week.

I hope that as people of faith, we can show God’s love to our public servants; understand their intentions and show them appreciation for what they do, even when we might disagree with them. Not only will we have more productive dialogue with them as a result, we will help them see God in the work that they do. And if they feel more positive about how they are serving both God and the public, perhaps we will too.

Lisa Bos is the director of government relations for World Vision U.S. Originally from West Michigan, she has worked in Washington D.C. since 1997. In her free time she enjoys running, softball, and hanging out with her sister.

Send a quick note to your representatives saying you’re praying for them — it could be just the encouragement they need!