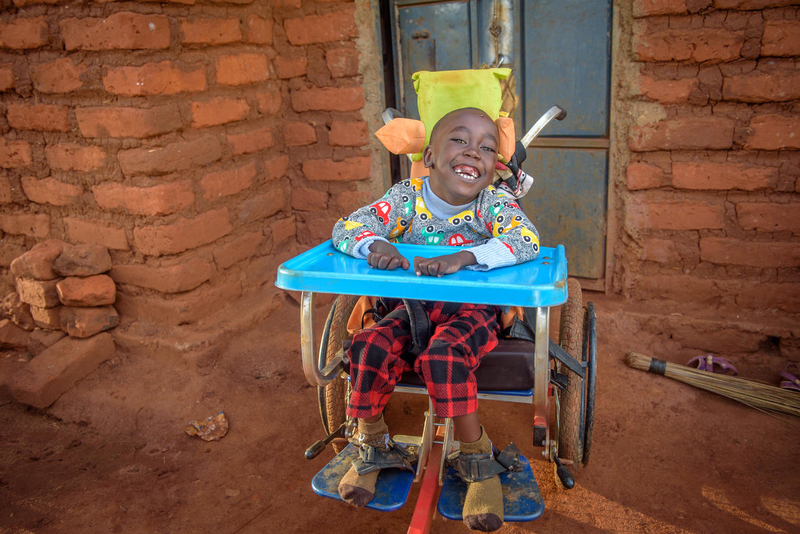 Boniface Wambua and Winfred Mutindi knew their firstborn child had some physical disabilities. His stiffened limbs would neither straighten nor relax.

They gave him the English name Dennis. His grandfather gave him the Kenyan name Ngumbau — warrior. Very apt since being born had been a battle.

Boniface and Winfred were away from their home in Mwala, Kenya, when Winfred went into labor. After eight hours, she gave birth to Dennis outdoors. She and Boniface then walked for two days to get to the nearest hospital, where they learned that Dennis had cerebral palsy.

When Boniface heard about Dennis’s disabilities, his faith was shaken. “I felt like God hated me — that it was a curse,” he says.

Dennis, now 8, spent his first five years mostly sitting on the rocky soil at their home, unable to move from place to place himself. He couldn’t be left alone. Winfred stuck close to home. Life felt small and limited for Dennis and his parents.

Then in 2011, World Vision started working in Mwala. Staff registered children, including Dennis, for child sponsorship. World Vision staff also implemented the USAID grant-funded ACCESS program, which works to improve the availability and sustainability of programs that provide wheelchairs in the developing world. World Vision staff worked with community volunteers to identify children with disabilities who might need extra help — children like Dennis.

Dennis received a proper fitting for his first wheelchair and his parents learned how to clean and care for it. Suddenly, the world became a lot bigger for Dennis.

Boniface and Winfred attended World Vision-led classes with other parents in the community who have children with special needs. Boniface says, “I used to see having a child with special needs as a problem, and it gave me a lot of sorrow.” But in the classes, other parents encouraged Boniface, telling him that Dennis could have a bright future.

Boniface went from feeling cursed to seeing Dennis as a gift from God. Now, he’s the parent offering encouragement to others. “For a parent with a special [needs] child, I would encourage them to take good care of their children and to love them because that is God’s plan,” he says. “[I would] encourage them to feel like they have a child who has all the potential. They could even be the light to the family.”

Dennis’s wheelchair means more than just mobility, it means freedom and new opportunities. Winfred was able to start a grocery store now that Dennis can accompany her. That extra income means the family is better able to provide for their needs. They’ve even been able to buy land where they now grow crops.

Wheelchair provision in Kenya is now fully integrated into World Vision’s programs, and staff have been trained on how to engage with the children with disabilities and their families.

Though World Vision was proud to implement the ACCESS program, it wouldn’t have been possible without USAID (United States Agency for International Development). The goal of USAID is to end the need for its existence, and to that end it works with organizations like World Vision to create lasting solutions to the barriers that keep people in poverty.

In total, U.S. foreign assistance, including USAID, makes up less than 1 percent of the federal budget (see 10 Things You Didn’t Know About Foreign Assistance). But that small percentage is powerful, especially for children. Because of foreign assistance, since 2012:

The programs that U.S. foreign aid make possible through USAID are life-changing and promote better global health and a stronger global economy. Support from USAID and other government grants allows World Vision to increase our impact, putting our goal of eliminating extreme poverty within reach.

Support sustainable programs that help families lift themselves out of poverty. Let your member of Congress know you care about protecting the 1% of the federal budget that goes to foreign aid.

The ACCESS program was made possible by the generous support of the American people through the United States Agency for International Development (USAID). The contents of this article are the responsibility of World Vision, Inc. and do not necessarily reflect the views of USAID or the United States Government.