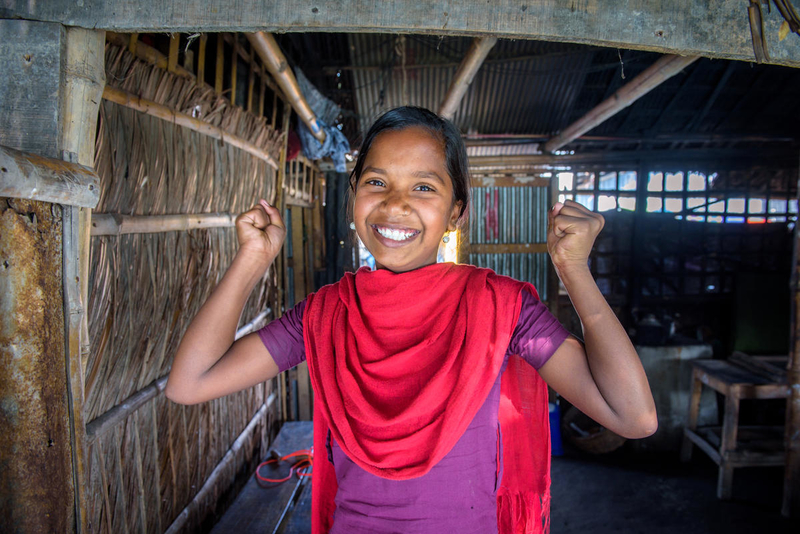 On International Day of the Girl Child (October 11), we reflect on the incredible progress the world has made towards equality for women and girls.

In the last decade, the practice of female genital mutilation and cutting (FGM/C) has declined 30 percent, women now make up 24 percent of members of national legislative bodies around the world (a 6 percent increase), and the number of women who were married as children has decreased by 15 percent globally.

Girls are breaking barriers imposed by stereotypes and exclusion, including those directed at children with disabilities and those living in marginalized communities. As entrepreneurs, innovators, and initiators of global movements, women and girls are creating a world that is relevant for them and for future generations.

But the world has a long way to go to achieve gender equality and eliminate the harmful practices that disproportionately impact girls, like FGM/C and child marriage. Each year, 12 million girls are married before the age of 18. That’s 23 girls every minute. In the introduction to World Vision’s new report on child marriage, Dola (age 15), a World Vision Young Leader from Bangladesh, shared:

“Nowadays, child marriage is a very big problem and deprives girls from their education, health, and safety. Child marriage is harmful to both girls and boys, but girls face many more physical and mental challenges because of pregnancy. Child brides who have children are psychologically unprepared and ill-equipped to become mothers at such a young age. Besides this, the number of students who drop out is increasing day by day because of child marriage. I see this every day.”

Core to World Vision’s mission is the opportunity for girls and boys to experience “life in all its fullness”: to receive an education, be economically empowered, achieve their dreams, and determine their own futures. Child brides and girls at risk of child marriage are some of the most vulnerable because they have been stripped of their agency and decision-making power as well as their childhood. As young brides, girls often do not get to finish school, they are pressured to become mothers very early, and they experience social isolation as a result of moving out of their community to live with their husbands.

World Vision’s campaign, “It Takes a World to End Violence Against Children,” is a global initiative to prevent violence wherever it occurs. Currently, it is being implemented in 76 countries, with national campaigns focused on ending child marriage in 17 of those countries.

Our new report titled, “New Vows: Empowering Communities to End Child Marriage,” compiles research and data from four unique contexts—Afghanistan, Bangladesh, Senegal, and Uganda—where child marriage rates are high and World Vision is working with communities to end the practice. The child marriage report also includes policy recommendations for the U.S. Government to take a more holistic and united approach, to fund more assistance and policy, and to support foreign policy aiming to end child marriage around the world.

One of the most important themes that emerged from this research was the value of meaningfully including the voices of adolescent girls and young women in all programming design and implementation. Girls can play a significant role as agents of transformation in their lives. When they are afforded the opportunity to communicate their opinions, are encouraged to take responsibility, and are invited to participate in decision-making processes, young people develop a sense of belonging, justice, responsibility, and solidarity. To effectively end child marriage, girls must have agency and the chance to transform their own lives as well as their communities. In Dola’s words:

“To create a better and safer world for children, we — the government, donors and the public — must take more actions to prevent child marriage. It is important to make the practice totally illegal, to educate parents not to marry off their daughters, and to mobilize communities to protect their girls from child marriage. We want a child-friendly environment for every child. We do not want to see a baby in a child’s womb. This can be the starting point of creating better and safer world for all children.”

Another important theme that emerged across all case studies in this report is the strong link between dropping out of school and child marriage. Leaving school is both a cause and a consequence of child marriage, but we know that education is critical to empowering girls to make decisions about their own lives. In fact, each year of additional secondary education reduces the likelihood of girls becoming child brides and becoming pregnant before the age of 18 by five to six percentage points.

On International Day of the Girl 2019, we invite you to use your voice and raise awareness about the need to keep girls in school and out of marriage before they’re ready. The Keeping Girls in School Act recognizes the importance of secondary education for girls and highlights the need to address the barriers that the 130 million out-of-school girls face in completing their secondary schooling. The bill requires that the U.S. government release at least one new opportunity addressing the barriers to girls’ education (like child marriage) and that U.S. foreign assistance programs take a more direct and holistic approach to reducing these specific barriers.

To support girls in creating the future they want, ask your member to co-sponsor the Keeping Girls in School Act.

Update: Good news! The Keeping Girls in School Act passed in the House of Representatives on January 28, 2019. Let’s keep progress going by asking the Senate to follow suit! Ask your senator to support the bill that breaks down barriers to girls’ education.

Top photo: Eleven-year-old Purnima in Bangladesh. She works as a babysitter in the neighborhood, which is far better than when she would work as a waitress and cleaner at a local hotel and get called mean names by patrons and her boss. She hopes to one day work for an organization like World Vision, and she is excited to attend the World Vision Child Friendly Learning and Recreation Center so she can learn and play jump rope. © 2017 World Vision, Laura Reinhardt