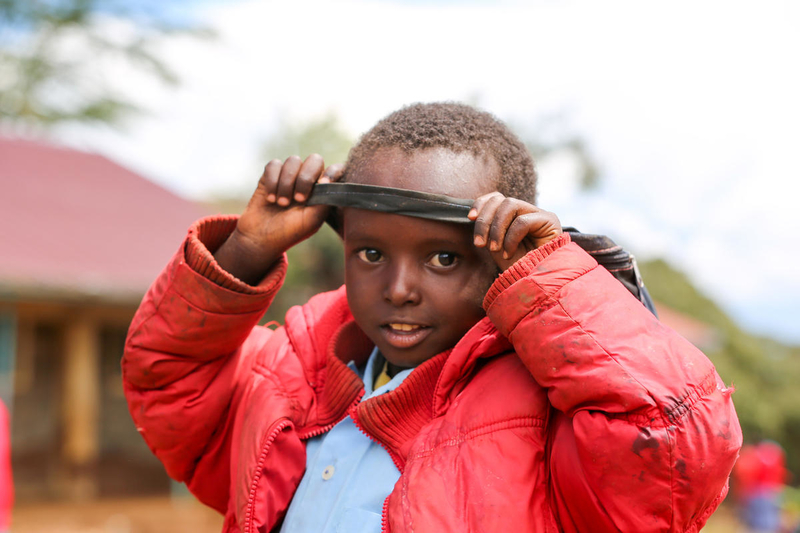 “We want to create a web of support to prevent and respond to violence against children. It’s about getting people to respond where we can’t.”

1.7 billion children are affected by some type of violence each year. Through our “It Takes a World” campaign, World Vision relentlessly advocates for an end to violence against children; highlighting it when it occurs and holding to account those responsible. We also work to prevent violence wherever it occurs so no child has to experience it.

In 2018 alone, the “It Takes a World” campaign has led to 183 policy changes that are impacting 104 million children.

In Kenya, this campaign is called “It Takes Us All” and has three main goals: ending female genital mutilation (FGM), child marriage, and sexual violence suffered by children. A big part of that campaign is empowering Kenyans to be part of the solution — to speak out against violence and report it when they see it.

To do this, World Vision works with local governments, faith leaders, media outlets, schools, parents, and even children themselves.

“We are looking at children not just as beneficiaries, but as those who will hold us accountable,” says Christine Mugambi, National Coordinator for Local Level Engagement with World Vision Kenya.

“Children must feel empowered to report, but there must be systems in place to handle it.”

That’s why, in late 2018, World Vision Kenya — in collaboration with Data Vault Systems and Child Line Kenya — helped pilot a mobile app in Nakura County, just northwest of Nairobi, that would allow for easier and more transparent reporting of child abuse cases.

Before the app, when a child abuse case would arise in the community, local men would try to work the matter out among themselves to avoid having others in the community know. But now, when a parent, teacher, or child uses the app to report a case, a report goes directly to the local chief as well as a community health worker. Together, the chief and the health worker investigate the case to verify it and determine if and when it should be escalated to the wider police force and government, as well as other doctors and counselors.

“As parents, as a community, as World Vision, are we doing enough for children? This is what we must ask ourselves.” — Christine Mugambi

The goal of the app, in addition to creating a more reliable and transparent way to report child abuse, is to expedite the process and get abuse cases closed within three months, rather than leaving them to languish in the court systems.

How can an app report child abuse?

In Nakura County, a group of citizens meet each month to discuss the success of the app with World Vision Kenya program officers. They report back on successes and failures to make sure the app is the best it can be for protecting children.

During one of these meetings, some of the challenges that the citizens discussed were heartbreaking. One man knew of instances where an abuse case was reported and a child needed medical attention, but the family wasn’t able to pay for transportation to the hospital. A health worker noted that the community needs more education so that parents know not to immediately bathe their child or wash their clothes after they report child abuse as this makes evidence gathering much more difficult.

But the app is indeed helping to make the community safer for children.

“Now if we see a case of child abuse, we can report it and it goes to court,” said Grace, a community health worker. “And we can give families psychosocial support when a child is abused.”

“There are many challenges in our community,” said Francis, another health care worker. “But now there has been cooperation between police, health workers, and others that is making it easier.”

Fred, a teacher in the county, said the app to report child abuse is making a big difference.

“The app is convenient and fast,” he said during the citizens’ meeting. “It’s good that it immediately involves several people — and saves people the money and travel of having to go to the police in-person. It saves time and money, which can be barriers for reporting.”

“It is also all inclusive: The chiefs and the health workers get all the same information they need to follow up in one simple step,” he continued. “It’s good for documentation and providing evidence — we know when the report was sent and have that concrete information that no one can distort later.”

“If this app continues, issues of child protection will be much better.”

The app is part of World Vision Kenya’s child protection programming, which models its framework on the World Health Organization’s INSPIRE evidence-based strategies for ending violence against children: implementation and enforcement of laws, norms and values, safe environments, parent and caregiver support, income and economic strengthening, response and support services, and education and life skills. These are proven strategies used in many of World Vision’s child protection interventions.  The ultimate goal? Creating a sustainable approach for increased protection of children.

This sustainable approach is an aspect of the Ending Violence Against Children congressional resolution in the United States, one of World Vision U.S.’s major advocacy priorities as a part of the “It Takes A World” global campaign.  This congressional resolution, if passed, encourages the U.S. government to implement the INSPIRE strategies as part of a whole-of-government strategy to address violence against children globally.

“As parents, as a community, as World Vision, are we doing enough for children? This is what we must ask ourselves,” says Christine Mugambi. “We hope one day we won’t need the app, that all of our child protection tactics have taken root and are working. But for now, the app is helping create transparency and accountability.”

“We’ve been in some places for years and seen little change, so we had to stop doing the same things,” says Christine. “In Nakuru, we are using modern technology to make sure children receive justice.”

The INSPIRE strategies are evidence-based strategies that ensure efforts to end violence are effective and long-lasting. The Ending Violence Against Children Resolution in U.S. Congress would implement these proven strategies in the the U.S.’s ongoing work to end violence, making the world a safer place for everyone.