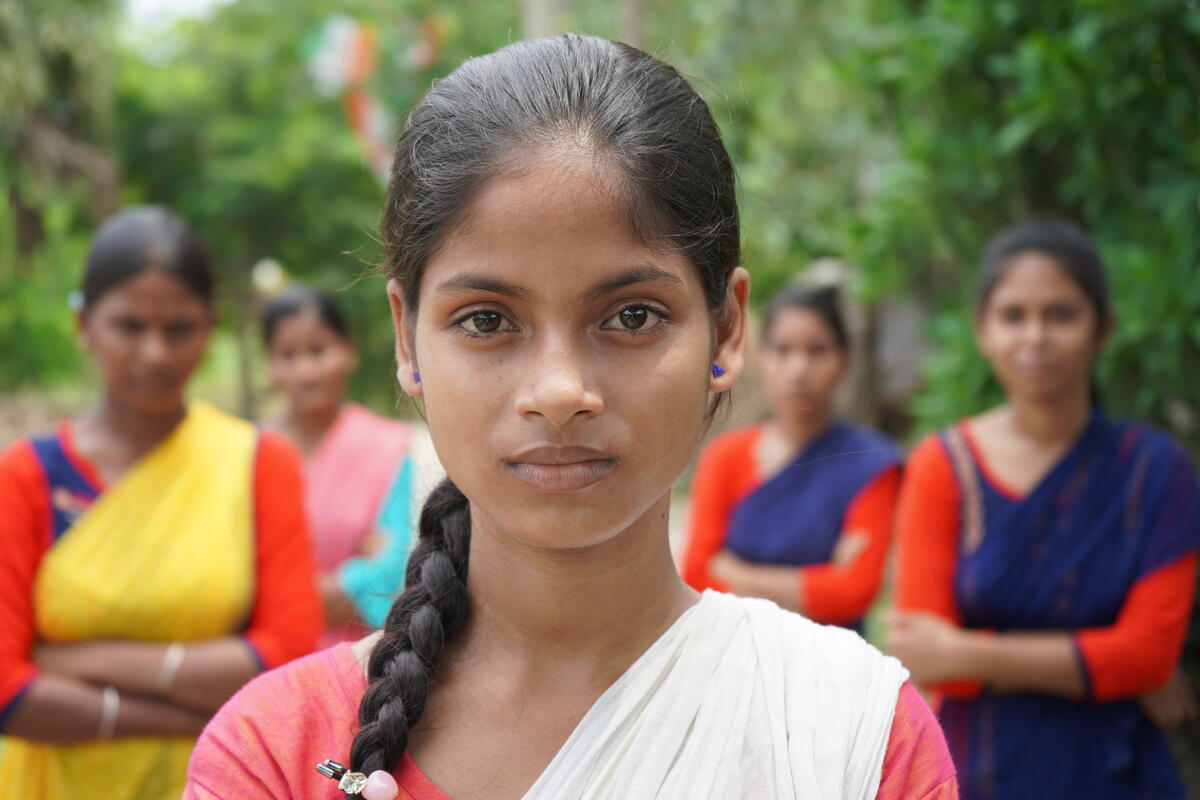 Farina* was 17 years old when her neighbor, Jaidul began harassing her to marry him. She declined, explaining that not only was she not yet 18, the legal age for marriage, but she wanted to pursue her education. She wanted to be able to contribute financially to her family so her four younger sisters could complete school, too. Her father, a day laborer, struggled to provide for his daughters on his income alone; providing two meals a day for everyone often was a challenge. Farina wanted to help, and getting married was not part of her plan.

Unfortunately, Farina’s story isn’t unique. Though the legal age for marriage in India is 18, cultural practices can lead to girls being married much younger, often to much older men. These marriages might go unreported or happen in areas where police simply don’t have the capacity to intervene. Poverty plays a role, too. In families like Farina’s, marrying off one daughter may be seen as the best way to provide for other children.

But Farina’s instinct was right: Education is the best way to overcome poverty. According to the World Bank, women who complete secondary education earn almost twice as much as women without education. And educated women contribute to stronger families and stronger economies overall.

Still, because Farina refused to marry against her will, she faced brutal online attacks. In many cases, women and girls facing gender-based violence don’t know where to turn for help, or they face societal or family pressure to stay quiet. This is where World Vision Girl Power Groups are uniquely positioned to provide a lifeline. Because the groups comprise adolescent girls who go to school and live in the community, they are easy for girls who need help to approach, and groups often hear about incidents of abuse as they are happening or, in the case of child marriage, even before.

Girl Power Groups (GPGs) are facilitated by World Vision volunteers and staff members, but the action is driven by the girls themselves. Groups meet regularly to learn about personal safety, what laws exist to protect them, and how to seek justice—even if they are ignored by law enforcement. In the Indian state of West Bengal, where Farina lives, there are 291 GPGs with over 9,000 members. More than two-thirds have taken protective actions on behalf of members or other girls in their community. Across India, World Vision supports 524 groups with more than 19,000 members.

Two girls in the Saniya Girl Power Group heard about the online abuse Farina was facing. They knew from their training that this was not only wrong, it was illegal. With the support of Farina and her family, the group went to the police and lodged a formal complaint.

The efforts of GPGs in India haven’t always been welcomed by the police. In a culture where gender roles are more defined, law enforcement didn’t always appreciate being pushed to action by teen girls. Political and religious leaders ignored GPGs, writing them off as insignificant when World Vision first began organizing them through its child protection work. Members of the groups were laughed at by their male peers.

Some religious and community leaders, and even the girls’ families, went as far as to discourage girls from speaking out and taking action. When the girls didn’t listen, some were threatened. GPGs have received threats from the families of those they’ve spoken out against, from religious leaders, and sometimes from their own parents, said Joseph Wesley, head of child protection programs for World Vision in India. They’ve been threatened with physical attacks, including rape, because of their unwillingness to back down when told to do so. But once girls realize the power of their own voices, they do not want to stay quiet.

World Vision’s highest priority is the safety of the children and families we work with. We work closely with local law enforcement, social services, and community stakeholders to support and protect GPGs as they advocate for themselves and their peers. The girls, through their persistence, have now earned more respect. Tensions still exists, but World Vision staff members have seen community attitudes toward GPGs become more supportive since the groups first started. Police are more willing to listen and respond to their demands for action—in part because they know that the girls won’t take no for an answer. The girls have been educated on alternative reporting mechanisms in the case of unresponsive authorities. They know that what their rights are. They know how to speak up. They know they are powerful.

After the Saniya GPG lodged a complaint in Farina’s case, the police went to Jaidul’s house. His parents were summoned to the station for an investigation, and Jaidul was asked to submit an affidavit, apologize to everyone, and promise not to repeat his actions. Police were clear that he had broken the law, and if he repeated his actions he’d be arrested and prosecuted. Now, Farina can pursue her dreams without being attacked simply for saying “no.”

The Saniya Girl Power Group has so far stopped four child marriages and intervened in one child trafficking case and one case of sexual harassment!

Still curious about how World Vision is working to empower women and promote gender equity? Head to our Philanthropy site to learn more.

Top photo: The Hena Girl Power group was formed in July 2019 and has 45 members. The girls have played an instrumental role in protecting children in their community from early marriage, trafficking, child labor, and dropping out of school. They have handled 16 different cases through March 2021.(©2021 World Vision)