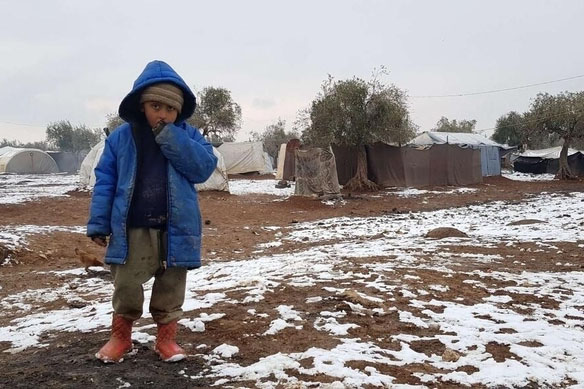 Since December 2019, nearly 1 million people have been forced to flee their homes in Syria due to the escalating conflict in Idlib and Aleppo. Sixty percent of those fleeing are children.

“Imagine being uprooted, under fire, on the run for more than nine years. You and your family becoming dreadfully accustomed to the earsplitting whine of incoming airstrikes. Being all too used to grabbing only what you can carry and fleeing for your life. Becoming a grim expert on catching a few hours of sleep in a makeshift tent or outside.

That’s exactly what life has been like for innocent families in Syria since March 2011. What’s unimaginable is that it could get any worse. But it has. My heart has been breaking over the humanitarian catastrophe in Idlib, northwest Syria.

In the past two months, nearly 1 million people — the population of San Jose, California — have been uprooted by rapidly escalating conflict and bombardment. For many families, it’s the third or fourth time they’ve been displaced. This conflict is literally pursuing them. And now they have nowhere else to go. “

Please join us in prayer for these uprooted lives in northwest Syria. The escalating conflict couldn’t have come at a worse time: winter. As temperatures dropped below zero, some people living in informal displacement camps in northwest Syria are reported to have died of the cold.

According to World Vision staff on the ground, among the dead is an 8-month-old boy. His mother noticed that his chest was not moving and his face color had changed in the middle of the night. A doctor later confirmed that the boy died in his sleep because of the cold. A year-and-a-half old girl whose father carried her for two hours in the camp was announced dead at arrival at a hospital in Aleppo.

Pray with us: Lord Jesus, our hearts break for those suffering in northwest Syria. Hold the parents who have lost children. Strengthen those trying to protect their children. We pray that families would stay warm and that winter would be less bitter. We ask that the world would work together to put an end to the violence in Syria. Amen.

Often, families spend all day on the move, seeking shelter with no luck. They sleep under tarpaulins, in cars, and in half-built buildings with no windows. Many don’t have enough blankets or winter clothes.

Aid workers are working around the clock to provide emergency support, but with tens of thousands of people arriving every day, supplies are low and the humanitarian response is overwhelmed.

Pray with us: Heavenly Father, give humanitarian agencies wisdom and favor as they try to help those in desperate need. Give organizations, governments, and leaders gifts of wisdom in how to be able to respond quickly and effectively. May people be generous in sharing their resources. Help us care for those fleeing, especially the children. Amen.

World Vision is working to reach these families and children with life-saving assistance: shelter, clean water, blankets, food, heaters, and more. We are supporting four hospitals and health clinics and 10 mobile medical units. World Vision is also running 11 safe spaces for children, women, and girls, psychosocial and other protective support for unaccompanied children.

This work reaches so many people because of funding from the U.S. International Disaster Assistance account. But as World Vision U.S. president Edgar Sandoval said in his editorial, this funding is at risk:

“The recent release of the administration’s budget amounts to nearly a $1.8 billion net loss to funding for humanitarian emergencies like Syria.

Foreign aid is a tiny percentage of the U.S. federal budget, but it makes a life-or-death difference in places such as Syria. It means a roof over a displaced family’s heads, a decent meal. The most basic hope for a better tomorrow.

…Any reduction in funding to respond to the conflict or to improve the resilience of communities after war is shortsighted. What we do — or don’t do — today has serious and far-reaching impact on the future of these children, who know little else than war.”

As you continue to pray for Syria, will you also ask Congress to continue to protect this funding? In times of escalating conflict, we can’t turn our backs on these families and children!