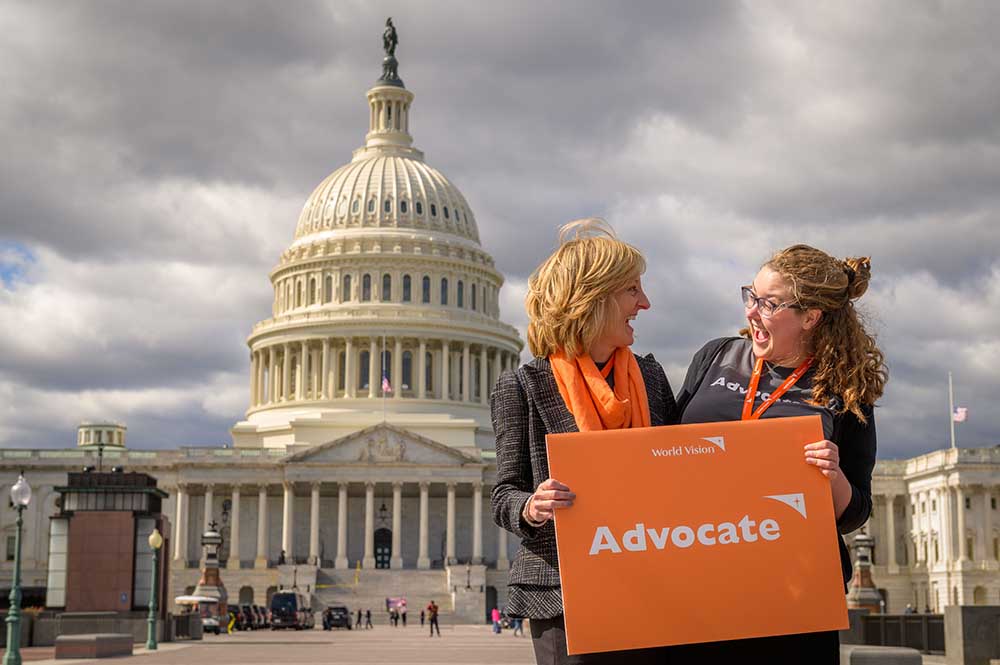 I know, I know, I say it every month. But this month I’m extra serious: In October, there was BIG NEWS for World Vision Advocacy — thank you, Jesus!

Members of our Volunteer Advocate Community and our online advocates worked together (whether they knew it or not!) to make progress on big issues that we’ve working on for a long time. And October marked our first-ever Advocacy Camp, where members of the Volunteer Advocate Community got together in Washington, DC to learn, be inspired, and advocate face to face with members of Congress!

Here are the big wins we’re celebrating from October:

The EVAC Resolution was introduced in Congress back in March, and it’s been a heartfelt issue for many of our advocates. In the last year, it’s gotten more actions than any other piece of legislation we’ve talked about: over 19,000 emails, calls, and social posts asking Congress to help keep kids safe!

As a result of advocate meetings with Congress during Advocacy Camp, EVAC received five new cosponsors! Cosponsors are key to demonstrate a bill’s support and increase its chances of passing. Case in point: On Wednesday, October 30, the resolution passed out of the House Foreign Affairs Committee and we’re working to bring the resolution to the floor for a vote soon!

This is HUGE! Thank you to every amazing advocate who emailed, made a phone call, held a meeting, and prayed asking for support for this resolution. All these actions help build the support that bills need to make it through Congress. It’s amazing how God uses us when we’re faithful to his call!

Learn more about the EVAC Resolution.

While the EVAC resolution has gotten the most actions in the last 12 months, KGISA swept October (fitting, since Day of the Girl was October 11)! In total, we saw 3,485 actions (emails, calls, and tweets) in support of breaking down the barriers that keep girls out of school!

Thanks in part to such strong advocacy, the bill now has 102 cosponsors in the House. The House Foreign Affairs Committee passed the bill unanimously, bringing it (like EVAC), one step closer to a floor vote in the entire House! (We’ll keep you updated on progress!)

Learn more about the Keeping Girls in School Act.

The Nutrition Resolution also passed committee in late October. We’re hoping this gets to the floor for a vote soon as well, because access to good nutrition does more than improve health and save lives — it helps break the cycle of poverty.

We were so pumped to hold our first-ever Advocacy Camp in October this year! A small group of Volunteer Advocates joined us to learn more about biblical advocacy, encourage each other, and, of course, advocate! Here are just a couple highlights from camp:

My time here has made a world of difference in my understanding, my courage, and has increased my passion to do more for children.

Recognizing the importance of phone calls in influencing Congress, we launched our Phone Action Team in October! This team has stepped up and agreed to receive one to two texts a month during times when their phone call to Congress will be most impactful. We’ll provide a script and the Phone Action Team will spring into phone-calling action!

Calls are easier than you think (they only take about 30 seconds), and if you’re interested in joining the team, just text “Action” to 313131.

It’s fitting that all the activity we saw in October has us feeling grateful and reflective as we head into November and the season of gratitude.

We are so grateful to all our advocates and the amazing ways that they answer God’s call to speak up for justice. We’re grateful for and humbled by the ways God uses our small voices to create big changes for his people all over the world!

Want to learn more about the Volunteer Advocate Community?

Sign up below and we’ll reach out with more information!