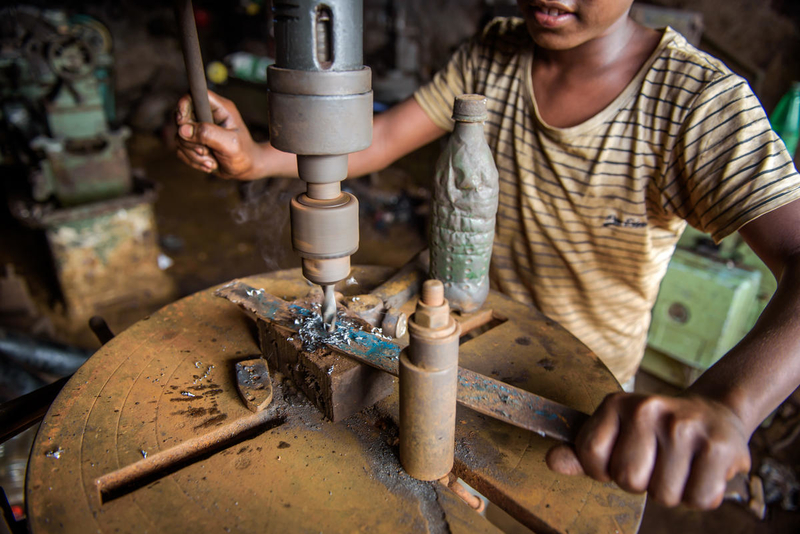 “See that you do not despise one of these little ones. For I tell you that their angels in heaven always see the face of my Father in heaven.”

In 2017, 152 million children ages 5 to 17 were engaged in child labor. Child labor harms a child’s social and mental development, reduces their ability to enjoy childhood, and limits educational opportunities. Without an education, children grow up without the skills they need to secure employment, making it more likely that they’ll send their own children to work someday.

This cycle must end. Stopping child labor creates a better world for children and adults.

Read on to learn more about child labor, why it matters, and what’s being done to ensure that we’re moving toward a future where all children can experience life in all its fullness (John 10:10).

How is child labor defined?

Child labor refers to work performed by children younger than 15, or 14 in some developing countries, according to the International Labour Organization (ILO).

Child labor takes many forms, and they’re all harmful to a child’s life and future. Child laborers can be found carrying heavy loads for hours, wielding machetes on farms, scavenging in garbage dumps, fighting in armed conflict, working in commercial sexual exploitation, climbing into mine shafts, working on fishing vessels, working in brick kilns, and working in domestic labor. Child labor is often hidden from the public eye to avoid sanctions, and children from indigenous groups, from lower social castes, and children of migrants are particularly vulnerable to these horrific tasks.

Child labor does not refer to a child helping with a family business (so long as it does not prevent them from going to school) or participating in an education or training program.

Of the 152 million children engaged in child labor in 2016, 4.3 million of those were in forced labor, and 73 million were in hazardous labor.

Why should I care about child labor?

Children in hazardous labor face harm to their physical, mental, and social development.  God cares about these children, and God calls us to speak on behalf of those who cannot speak for themselves (Prov. 31:8). Although child labor may feel far removed from our own lives, we can still be part of the solution.

Every year, an estimated $176 billion is lost in potential future wages when children engage in hazardous labor instead of completing their education. Without a basic education, a child will have a higher risk of becoming unemployed, earning low wages, and engaging in hazardous work as an adult. Again, this increases the likelihood that they will put their own children to work, continuing the cycle of child labor and poverty.

“There is broad consensus that the single most effective way to stem the flow of school-aged children into child labour is to improve access to and quality of schooling.” — International Labour Organization

Finally, combating child labor and strengthening labor standards helps ensure fair competition for workers in the United States and around the world. And removing child labor from global supply chains ensures that consumers are able to buy products that don’t exploit children.

What is already being done?

The Bureau of International Labor Affairs (ILAB) is the U.S. agency combating exploitative child labor. ILAB works with organizations like World Vision to prevent and address child labor around the world.

Watch Latha’s story to see how World Vision works together with families to create alternatives to child labor:

How can I help?

Because of ILAB, we have already made great strides in helping countries strengthen and enforce their child labor laws. ILAB-funded programs have helped contribute to a worldwide reduction of child labor by 25 percent among boys and 40 percent among girls since the year 2000.

But there’s more work to do. We still need a stronger inspection systems and stronger laws, especially in informal economies where the majority of child labor exists. Child labor has declined since 2000, but that decline slowed between 2012 and 2016. Without increased efforts, 121 million children will still be involved in child labor in 2025, with 52 million of those in hazardous work.

You can raise your voice on behalf of these children. By contacting your members of Congress, you can let them know that you support the global effort to stop child labor. Let Congress know that it’s vital that we create a safer world for all God’s children.

Together, we can help more children get an education, feel safe and protected, and enjoy life in all its fullness.

Top photo: Arafat Hossain, age 12, finished grade 5 before he had to quit school at the age of 10. Arafat works in a lathe machine shop from 9 a.m. to 10 p.m. six days a week to bring home 500 taka (a little less than $6 USD). This helps provide food for his family since his parents’ income can’t feed the entire family. (©2018 World Vision/photo by Laura Reinhardt)