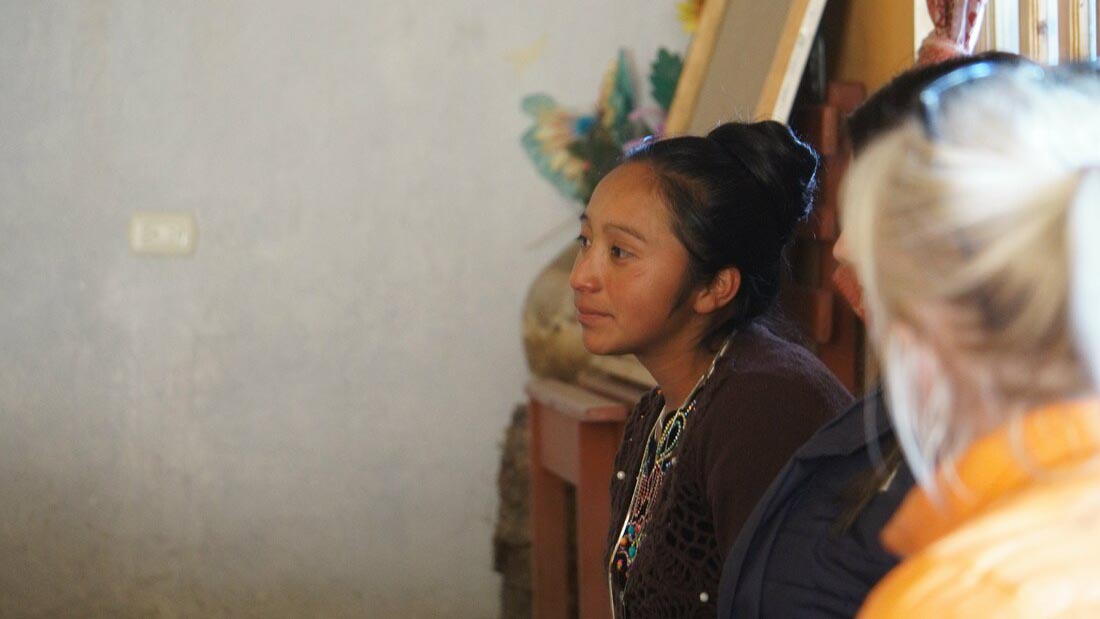 The dimly lit building hummed with people. Families, World Vision staff, and Child Ambassadors chatted and exchanged stories around a long table. Children were sprinkled throughout the group, drawing, giggling, the smaller ones being handed from adult to adult. In the midst of the pleasant bustle, a young woman walked to the front of the room. Conversations dropped off one by one as she introduced herself. Her name was Fabiola, and she had a story to tell.

Fabiola had traveled to Chiantla that day to share with the visiting Child Ambassador team, for she, too, was passionate about the future of her community’s children. As she shared about her volunteer work in a World Vision-supported children’s center, we could see the energy radiating from her. She’s one of those exceptional people whom I could never imagine sitting still for long. She has a mission, and she is a woman of action.

Just a year earlier, at age 17, Fabiola’s passion for the future had driven her to act decisively. She had grown worried for her two younger brothers and her sister. Across northern Guatemala, where Fabiola lives, small children die of preventable diseases; older children drop out of school to work family farms. Parents strive to change the cycle, but the remoteness of the region limits their access to opportunities. A better way forward seemed out of reach.

So Fabiola decided to reach farther.

She had heard stories of jobs to the north. If she could make it across Mexico and into the U.S., she believed she’d be able to work and save up to help her siblings. Fabiola’s father discovered her plans and insisted it was far too dangerous for her to go alone. If she was determined to go, he was going with her.

Fabiola and her father are not alone in dreaming that the U.S. holds a better future. Refugees from Honduras and El Salvador hope the U.S. will mean an escape from violence. And many Guatemalan families, like Fabiola’s, hope that migrating will lead to sustainable work.

An unusually high percentage of people choosing emigration come from the region where Fabiola’s family lives. The needs there are so extreme, from malnutrition to absent healthcare to restricted job opportunities, and the region so remote that families have run out of options. And so they turn their paths north.

But after taking out loans to cover the cost of passage, boarding a truck that would take them across Mexico to the Rio Grande, and starting north toward Houston, Fabiola and her father were taken into custody by the U.S. border patrol.

While in U.S. custody, Fabiola and her father were separated and held in harsh conditions. She heard the cries of younger children also in custody and was not allowed to comfort them. World Vision advocates for the rights of vulnerable children like Fabiola to be respected while they are on U.S. soil, and they are also working in Central America to change the outlook for Central Americans who choose to stay.

Immigration authorities eventually determined that Fabiola and her father should be sent back home. They returned to Guatemala without finding the future they’d dreamed of.

But Fabiola didn’t give up. She kept reaching toward a better future, and now World Vision is reaching with her. World Vision staff and local families are working together to bring to northern Guatemala the opportunities that Fabiola and her father so desperately sought.

World Vision donors sponsored Fabiola’s sister and one of her brothers, taking the first step toward Fabiola’s dream that they would have lasting health and completed education. Fabiola herself now volunteers in World Vision’s early childhood programs, giving children an early start on a bright future.

And there’s more. World Vision and the people of northern Guatemala are working to broaden their options, to implement change that will be safer and more sustainable than emigration. U.S. foreign assistance, by partnering with development organizations and Guatemalans, is playing a significant role in that change.

How foreign assistance is creating change

For example, the USAID-funded Puentes project, implemented by World Vision, empowers youth to take control of their future by equipping them with the skills they need to access opportunities and improve their income. USAID agricultural programming has helped rural farmers in Guatemala to increase their sales by more than 50 percent. And because of Feed the Future, the U.S. Government’s global food security initiative, 230,000 children have received vital nutritional support.

Foreign assistance can be an important part of the strategy that builds a stronger and more stable Central America. This funding comes alongside private funding, like child sponsorship, as well as the efforts of the Guatemalan people, to build a country where people can imagine a bright future without leaving home.

By asking to maintain foreign assistance funding to Central America, we can send the message that Americans believe in Salvadorans, Hondurans, and Guatemalans like Fabiola and her family. We believe that God wants them to live life in all its fullness (John 10:10), and we want to be a part of it.

Join us in asking the Administration not to cut the small percentage of foreign assistance that goes to our neighbors in Central America. Ask them to stand with Fabiola.

This above version of Fabiola’s story is shared with the author’s permission. For more information and to read Fabiola’s full story, see the original version here. Images by Linnae Asiel.

Here there is no Gentile or Jew, circumcised or uncircumcised, barbarian, Scythian, slave or free, but Christ is all, and is in all.
Therefore, as God’s chosen people, holy and dearly loved, clothe yourselves with compassion, kindness, humility, gentleness and patience.
— Colossians 3:11-12 (NIV)