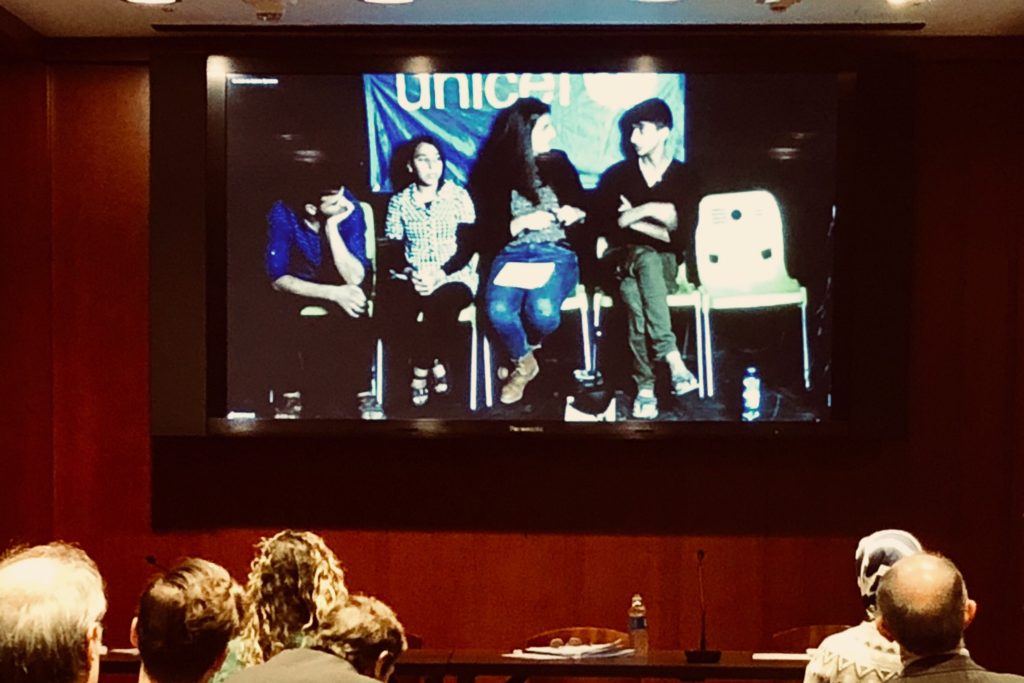 “What is the aim of this Congress? And what will happen for us next?” asked 19-year-old Hameed to a captive audience in the U.S. Capitol building.

Over live video stream from the Harsham IDP (Internally Displaced People) and refugee camp in Iraq, Hameed (19), Yasmeen (13), and Mohamed (16), shared the hardships they experienced when they were forced to leave their homes, the challenges they now endure living inside the refugee camp, and the hopes they have for the future.

In 2016, Hameed and his family fled their home in Mosul, which had become a battleground in the armed conflict between Iraqi forces and ISIS. When Hameed’s family fled, he had to leave school with no promise of returning. Yasmeen left behind her community and hasn’t seen her friends in over a year. Mohamed and his family arrived in Erbil and lived in a tent with absolutely nothing. He told the group that this was, “a really hard time to transition… we went from a house to a tent.”

On Thursday, November 16, a group of international nongovernmental organizations (INGOs), congressional staff, humanitarians, advocates, and other influencers gathered in the Capitol Building to hear from these adolescents and share the work of the No Lost Generation (NLG) initiative, which is led jointly by Mercy Corps, Save the Children, UNICEF, and World Vision.[1] This initiative brings together key partners to achieve agreed outcomes essential for the education, protection, well-being, and future of children affected by the conflicts in Syria and Iraq.

Mark Chapple, head of NLG for the World Vision Syria Response, introduced NLG and sat on the panel for Q&A with other partner organizations. In his introductory comments, he shared that this year, the initiative has reached over one million children and youth in Syria with equitable access to quality learning and skills development and opportunities, and supported over 250,000 adolescent and youth-led civil engagement initiatives at the community level. In Iraq, NLG reached 100,000 adolescents and youth with life skills and education programs and supported over 75,000 civic engagement initiatives.

Hameed shared, “the agencies that work in the camps provide school and child friendly spaces that help us improve our life inside the camp and forget the difficulties we lived before.”

Despite their arduous circumstances, these adolescents have unabated hope. Hameed told the group that he wants to go back and finish his education, become a teacher, and impact the community where he grew up. In the words of Representative Engel, who provided comments at the event, “We must do all in our power to make sure that they will not become a lost generation, nor the last generation. We must do it for all those who cling to that hope for a brighter future for the children of Iraq and Syria. We know it won’t be easy work, but we need to stay at it… their struggle must be our call to action.” An investment in Syrian and Iraqi children and youth today is an investment in future stability of these countries and the surrounding region.

As Congress begins to make important decisions about humanitarian funding and priorities for FY19, you can play a role in answering Hameed’s question. The aim of Congress should be to support the dreams and futures of children and youth affected by the conflicts in Iraq and Syria.

Email your members of Congress and ask them to put pressure on leadership of the foreign affairs, foreign relations, and appropriations committees to do the following:

[1] This event was sponsored by Congressman Engel and Congressman Hultgren and hosted by Interaction, an alliance of over 190 international NGOs in partnership with Shared Studios and the No Lost Generation NGO partners. Interaction convenes a number of working groups, including the Syria-Iraq Working Group and the Protection Working.

Photo of the live video stream from the Harsham IDP. (Photo courtesy of Whitney Young.)