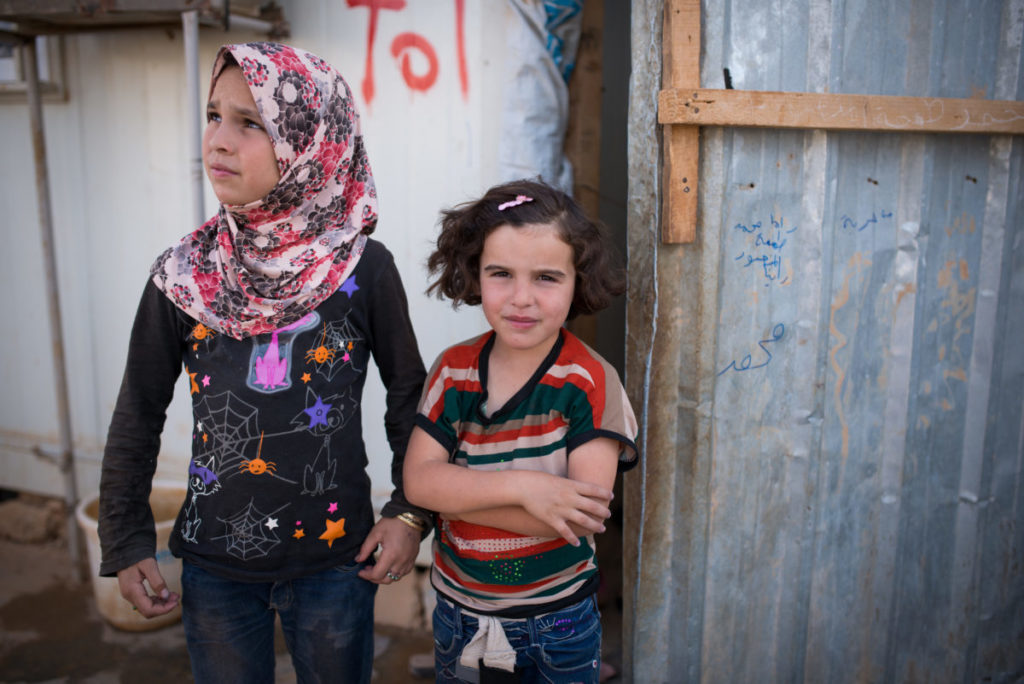 I looked down the barrel of the long gun inches from the bus window, jolted into alertness from the hazy slumber of our bus trip to the Za’atari Refugee Camp, located just South of the Syria-Jordan border. The tank was a slightly ironic sight outside a camp filled with people who had fled the mortar rounds and air raids of the ongoing conflict in the north, but an understandable precaution given our proximity to the border.  As we pulled into the camp, I spotted the welcome sign with two familiar logos, one of World Vision and another of USAID. That sign represents the reason I’m a World Vision advocacy intern this summer.

It all started with the clever machinations of my mother, the choices of my church, and a book. When I was still young enough to wear footsie PJ’s openly, my mother would read me sections of “A Life Like Mine,” a picture filled volume produced by UNICEF. Each page detailed lives of children my age — kids who lived outside the prosperous bubble of my California home town. I went to bed dreaming of the polio vaccinators and the long walks to clean water that had been displayed on the glossy sheets and spoke of in the steady rise and fall of my mother’s voice. In addition to opening my mind to the wider globe, the book was also the reason I knew the term “disease vector” before I could do multiplication tables.

When I was in elementary school, World Vision came to Menlo Park Presbyterian Church. Partnering with Pastor John Ortberg and the congregation, World Vision initiated one of the organization’s first kit assembly days. Using donated supplies, the congregation spent the weekend assembling portable pouches of medical supplies for community volunteers, who would then use the kits while making rounds in their communities to care for those suffering from HIV and AIDS. Being the competitive sort, I raced my younger brother to see who could assemble the most kits. Arranging latex gloves and anti-bacterial cream into the bright orange portable shells became an annual tradition I looked forward to (not just because I always packed more kits than my brother).

Then came the stocking stuffers with slips letting me know goats and other animals had been given in my name through the World Vision gift catalog. Inspired by both the organization’s mission and the adorable animals, I put my preadolescent cuteness to work, giving a presentation to my grandparents and family friends on why they should support my “ark” project and donate animals through international nonprofits. Many poster board presentations and kit packing competitions later, that bright orange seal of World Vision meant something to me when I glimpsed it at the entrance of that camp in Jordan.

The team for my study abroad semester in the Middle East floor of a small, two-room shelter and listened to refugees who had fled their homes share their stories. An avid news consumer, I had read my share of articles about the horrors of war and of the number of Syrians who had been displaced, but nothing matches seeing a young boy with the same playfulness of your younger brother and hearing his gratitude for “not to be[ing] woken by bombs.” Or to see his mother place his sister in her lap to read to both, her halting voice reminding you of your own mother’s voice, walking you through the lines of text from your favorite picture book.

My experience abroad and as a child motivated my move across the country to D.C. this Summer to accept a position as an advocacy intern. On my trip I had seen how the methods that my government uses to address the challenges of state fragility matter both to the lives of children like those I met, and our nation’s interests. Fragile states like Syria, where the families I met fled from, are technically characterized by the break-down of social contracts, institutions and social relationships. No two states are alike.  Some states are fragile in the demission of security, while others might be fragile societally, economically, environmentally, or politically. The Organization for Economic Co-operation and Development (OECD) estimates that by 2030, two-thirds of all people living in extreme poverty (less than $1.90 USD per day) will live in fragile states. Poverty is becoming concentrated, and thus work in fragile states is becoming more important.

Of course changing policy requires far more thought than simply stating “fragility is a problem.” I spent much of my summer as an intern reading, discussing, and researching, contributing to a team that makes sure World Vision gets it right when we talk about fragility with our nation’s leaders. While at times my internship felt like drinking from a fire hose, I also enjoyed my learning process. It provided convenient excuses to sit in on Senate hearings and think tank presentations to prepare notes for my teammates. My summer culminated in an internal one pager for staff providing a framework and summary of World Vision’s approach to Fragile States. This tool will provide a way for World Vision to easily talk about the critical work it is doing and to help raise awareness of this increasingly important issue that the world must focus on.

Today, World Vision works in thirty-nine different fragile states and 90 percent of World Vision USA’s International Programs Group’s grants are implemented in fragile states. Yet, World Vision is but one player in addressing these challenges. The U.S. government must recognize that addressing fragility is in our nation’s interest, not just as an important economic and diplomatic investment, but also an investment in our own national security. U.S. aid not only prevents fragile states from destabilizing regions but also sets a diplomatic environment that allows for effective U.S. security, economic, and diplomatic intervention. As the conversation in Washington swirls about aid reform, addressing the challenges and needs of fragile states must remain a priority. I see working together as the only option forward for all children to experience the bounty of a life like mine. Andrew is a rising Senior biology and political science major at Westmont College. Coming off a spring semester in the Middle East and a summer as World Vision’s Fragile States Intern, Andrew looks forward to working as the Features Editor for the school newspaper next year and possibly returning to the D.C. area next summer. When not reading The Economist or his favorite fantasy series, Andrew enjoys learning about global health, running his school’s improv club, and playing a board game tactician.

Photo: Sedra, 7, shares about one of the things she loves – her pink plastic comb. She found it on the ground at Za’atari Refugee Camp where she and her six siblings now live. © 2013 World Vision/ photo by Jon Warren