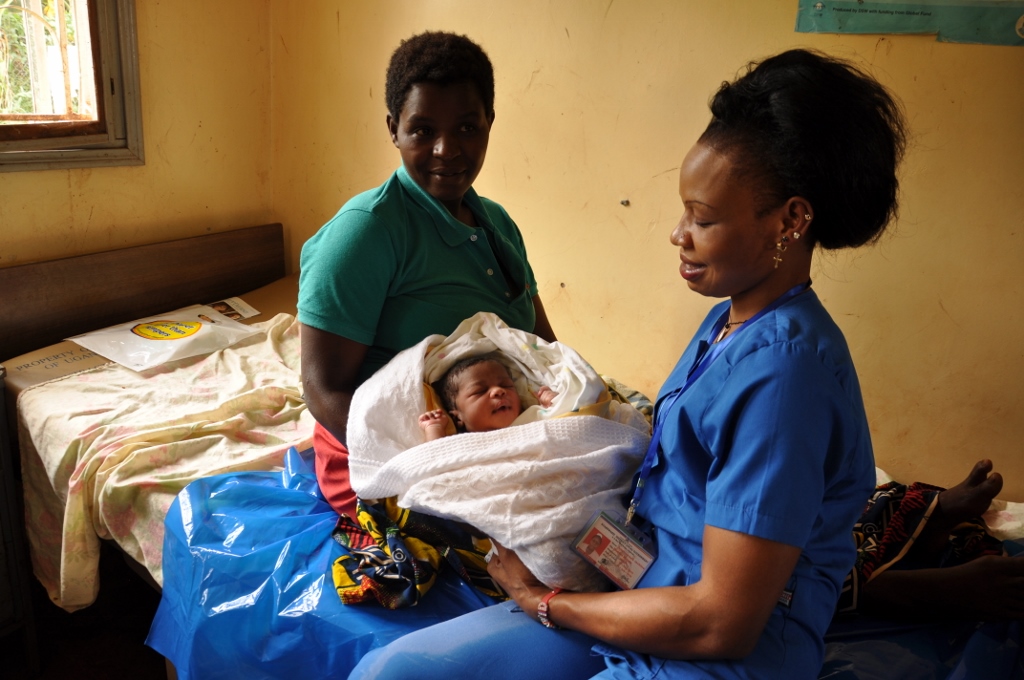 It doesn’t matter where you live — simply raising your voice through advocacy can make an impact whether you live in rural Uganda or in the United States. Learn how one community in Uganda advocated for better health and how you can join them by advocating for the re-introduction of the Reach Every Mother and Child Act to help save moms and kids.

Three-year-old Jonathan Tumuhirwe screams when the clinical officer places a stethoscope on his chest. His mother, Gertrude Mirembe, 20, explains, “Jonathan has [a] cough and fever.” The lab test for malaria parasites was negative, and Jonathan is sent home with cough syrup and deworming tablets.

Like most kids, Jonathan is happy to get out of Ntwetwe Health Centre IV in Uganda and go home. But this health center is the biggest in Kyankwanzi district, which doesn’t have a hospital. It also serves patients from Mubende and Kibaale districts.

The place is buzzing with activity these days. Irene Nalweyiso, 28, and her son Mavin Nsamba, 9, are two of 30 patients in line at the Out Patient Department (OPD), where five mothers have just given birth.

“We handle at least 1,500 out-patients and at most 1,800 in a month. Common conditions include malaria, cough, flu, diarrhea, and AIDS,” says Dr. Gordon David Mayengo.

Things have only recently gotten better at this health center. In the past, this facility, like most run by the government, suffered from inadequate funding, poor infrastructure, insufficient drug supplies, and lack of proper staffing. Mike Senzizi Kaweesi, a local elder, saw it all.

“The drugs were inadequate,” Mike recalls. “The Out Patient Department was very small with cracks in the walls.”

The patients were more afraid of dying from a wall crushing them than from their illnesses. The maternity ward, originally built for 10, was accommodating 30 women. Mothers were delivering on the floor. There were only 17 staff and no doctors.

“I was the only midwife for 22 years until 2012. One day I had to run between three mothers delivering simultaneously,” says Catherine Namuganyi, who assisted up to 70 mothers a month.

People were fed up. “I stopped going to the health center,” says Gertrude, Jonathan’s mom.

But in 2012, World Vision came up with a solution.

“The organization trained 10 community members on citizen rights and duties, government health and education policies, government standards for health units and schools, and how to monitor these institutions using the standards,” says Mike, who became a member of the Citizen Voice in Action (CVA) working group.

“This approach educates citizens on their rights and duties and empowers them to monitor and demand better services and accountability from providers of public services,” explains Judith Nakamanya, a CVA coordinator.

In April the CVA group called a gathering of 600 people to the health center, including community members, health workers, local councils, the town clerk, and the mayor.

“We identified the problems, made a work plan, and allocated responsibilities,” Mike recounts. “Some people were not happy because we were disclosing so many things.”

“The gathering discussed recruitment of health workers, as the district had only 72, and water for the health facilities,” says Lawrence.

As a result of these advocacy activities, Kyankwanzi district recruited over 100 health workers, drugs are available, and a doctor and three more midwives were hired. The number of staff was increased from 17 to 50.

“We can do caesarean section[s] and all kinds of minor operations here,” says Dr. Mayengo.

World Vision constructed a new Outpatient Department building, which accommodates both outpatients and in-patients; AMREF Health Africa built the laboratory, and Infectious Diseases Institute is erecting a new maternity ward. The sub-county built the fence. Electricity and piped water have been connected to the health center.

“The nurses receive you well and guide you properly,” says Gertrude’s husband, Geoffrey Begumanya, 23. “The health unit management committee was trained by World Vision and is now active.”

The mayor, Sam Kasumba Lukyamuzi, is mesmerized. “Today when they bring drugs, they even call local leaders to witness,” he says.

The CVA approach was first introduced in Mpigi, Tororo, and Kole districts in 2007. Now communities in 20 districts with about 40 working groups and 520 members in Uganda are using it to advocate for better service delivery in health and education. CVA is working well in 34 countries across the globe.