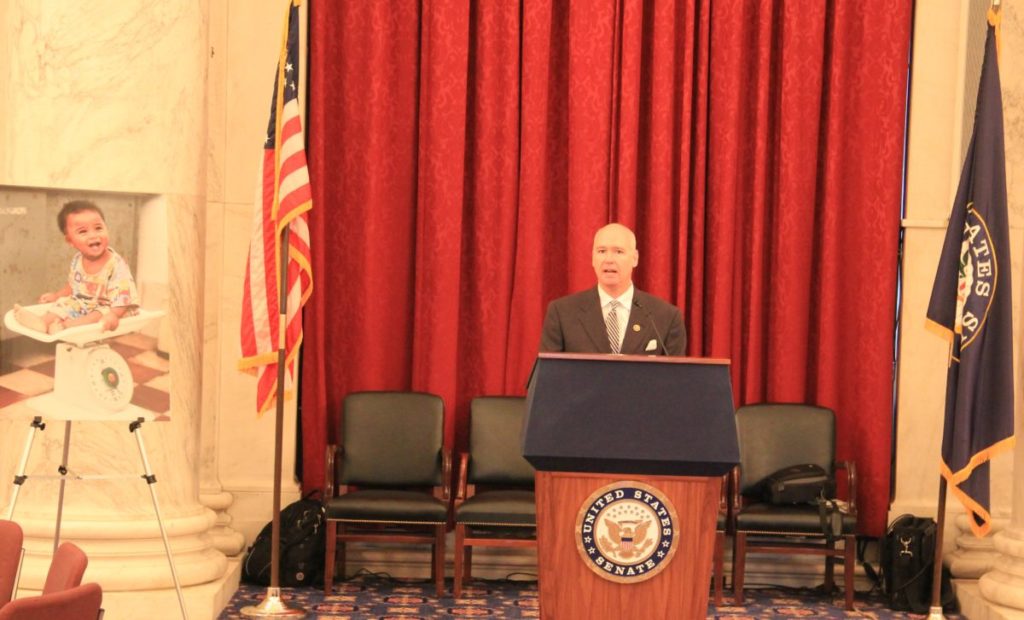 This week, members of Congress and faith-based organizations that work around the globe, including World Vision, met on Capitol Hill to give prayers of thanks for the increased number of mothers and children who are surviving each year – in a large part thanks to U.S. investment, increased innovation, and advocates who speak up to support both of these things.

We would like to say thank you to Senator Chris Coons, Senator John Isakson, Congressman Adam Smith, and Congressman Anders Crenshaw for hosting the Congressional prayer breakfast this week. World Vision’s director of government relations, Lisa Bos shares from a post she coauthored on The Hill, why there is reason to pray in celebration –

Because when World Vision implements PEPFAR funds in Zambia, AIDS orphans grow into healthy teens. You wouldn’t know that Geoffrey Matiya, a lively 14-year-old boy, has been HIV-positive since birth. Both his parents died from AIDS; he lives in Zambia with his great aunt and uncle and is one of the children supported by PEPFAR through a program implemented by World Vision. A key factor in the program’s success is its network of 40,000 caregivers, with support of the Ministry of Health, who make bi-weekly visits to households to provide counseling, testing for HIV and malaria, psychosocial support to orphans, and more. The project is about to end. Not because it’s failing, but because it’s working. Caregivers now have the tools and commitment to sustainably provide services to communities affected by HIV; stigma has reduced; HIV prevalence rates continue to drop; lives are being saved, especially women and children.

Success stories such as these, hidden by the headlines, highlight the key role many faith communities play in delivering lifesaving results for children and families by partnering with the U.S. government. Though it varies widely, faith-based organizations average twelve percent of their funding from government sources, an investment that is leveraged by the generosity of the American people. According to the Center for Faith & The Common Good report, for every $1 invested by the U.S. government, American faith-based organizations raised $5 in 2014, illustrating just how strong grassroots and faith community commitments are to international assistance. Success is unprecedented: Preventable deaths for children under age five have fallen by more than half since 1990, from 12.6 million to 5.9 million in 2015.

Join us in prayer: Dear Lord, every child is precious to You. You know every child by name, and You care about each one’s past, present, and future. We rejoice in the millions of lives that have been saved. Please continue to equip developing nations with the funding, personnel, and extra help they need to provide services that promote healthy families. Please guide nations to continue to care about Your little ones by investing in the gift of health for all children.